Yeast may be microscopic in size, but this living organism is an essential ingredient to helping bread loaves rise. According to Red Star Yeast’s website: “The biochemical process of fermentation that is responsible for these actions was not understood and undoubtedly looked upon by early man as a mysterious and even magical phenomenon.”

Red Star Yeast works to take that mystery out using yeast in home baking, according to Kelly Olson, consumer relations supervisor at Red Star Yeast. She explained that Red Star Yeast wants to “take the fear out of baking with yeast” and encourage home baking by providing educational resources and partnering with organizations like the Home Baking Association and initiatives like King Arthur Flour’s Bake for Good program. Red Star Yeast also sponsors baking contests at nearly 600 country and state fairs each year.

“Bakers are easily intimated by yeast,” Olson said. “Don’t fear the yeast. Treat it properly and it will be your friend.”

Red Star Yeast’s commitment to education and innovation meshes well with the National Festival of Breads search for creative, tasty recipes from amateur home bakers. As a result, Red Star Yeast has joined the Festival as a major sponsor for the first time in 2015.

“Joining the National Festival of Breads is a natural extension of what we already do,” Olson said. “There is no other amateur baking contest like it and we think it is a perfect match for us.”

Prior to commercial production of yeast, home bakers used starters, most often from the prior day’s dough, in order to trap the wild yeast. This had inconsistent results, but it was not until the 1860s when yeast was even identified as the living organism responsible for dough leavening.

Red Star Yeast, based in Milwaukee, Wisconsin, started in the late 1880s as Meadow Springs Distillery, which had a side yeast business. Eventually, the yeast business adopted the name of its most popular brand, Red Star Yeast. Yeast production was key to the company’s viability during Prohibition and Red Star Yeast continued to innovate as the business grew.

For example, Red Star Yeast used their scientific expertise to help meet the dietary needs of soldiers during World War II. At the time, yeast produced in compressed form with a very high moisture content, which reduced its shelf life and made it difficult to ship overseas. Red Star Yeast helped develop the first active dry yeast, with a moisture content of only 8 percent, and the company produced more than 5 million pounds of active dry yeast in four years for use in mobile Army kitchens overseas.

In 2001, the Lesaffre Group, the world leader in yeast science and technology and global yeast production, acquired Red Star Yeast and formed the Lesaffre Yeast Corporation as their North American subsidiary. Innovations continue not only in yeast for baking and brewing, but also for human and animal nutrition and health and other fermentation technologies. 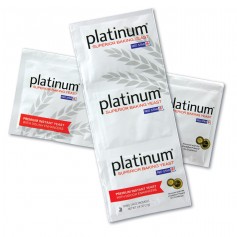 “It just takes the guesswork out of baking,” Olson said. “Platinum allows home bakers to achieve professional results every time.”

All of the National Festival of Breads adult recipes must utilize Red Star Yeast in their recipes, giving contestants' bread the added advantage of this high quality ingredient. Additionally, Red Star Yeast will be spotlighting its “Baking the World a Better Place” partnership with Stop Hunger Now at the Festival in June.

“We are excited to have this relied-upon yeast playing a valued role in our baking contest,” said Cindy Falk, director of the National Festival of Breads. “Red Star Yeast has been at the center of home baking for generations, bonding families in the kitchen. So, this trustworthy yeast is a perfect ingredient in the wide-array of recipes entered in the National Festival of Breads.”

Although entries are no longer being accepted for the National of Festival of Breads, bakers of any skill level or age can benefit from Red Star Yeast’s yeast baking resources. Check out their website for recipes, instructional tips and videos and lessons. Red Star Yeast is also active on Twitter, Facebook, Pinterest, Instagram and YouTube.