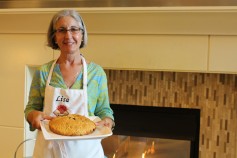 Judges selected Keys’ Smokehouse Cranberry Cheese Bread from among eight finalist recipes baked at the public competition on June 13 in Manhattan. The National Festival of Breads is the nation’s only amateur bread-baking competition.

Keys said, “Memories of visits with my in-laws in Quechee, Vermont, inspired this bread. My mother in-law always had smoked cheeses from the local farmer and fresh-made maple syrup tapped from trees in town. She was also into healthy foods and introduced me to tofu in delicious breakfast smoothies. This bread honors all of her goodness.”

Keys’ blog, Good Grief Cook, is dedicated to celebrating her son William, who passed away four years ago. For Keys, her time spent cooking is therapeutic as well as tasty and she said she hopes the recipes and memories shared provide strength and support to others who have lost a loved one.

“What I’ve learned is that the grief is never going away,” she said. “I wanted to celebrate the amazing son that he was and show people a positive way to deal with grief.”

As the 2015 National Festival of Breads champion, Keys received $2,000 cash, plus a trip to attend a baking class of her choice at the King Arthur Flour Baking Education Center in Norwich, Vermont. In addition, she will receive a supply (120 envelopes) of Red Star Yeast.

“It was a difficult decision because all of the breads were incredibly different and all held their own merit,” said Rohrich. “Our judging really came down to which bread scored well in all the different categories. The winning bread brought forth the best balance in flavor, but also had great depth of flavor.

“It had incredible workmanship and texture along with ease of preparation. As judges we all agreed, this is a bread we can't wait to make in our own homes.”

The recipe is available at http://nationalfestivalofbreads.com/cheesebread.

In addition to the competition, the National Festival of Breads featured educational baking demonstrations, children’s activities, bread tasting and more. This was the fourth biennial event, and barbecue demonstrations and sampling were added this year. The nearly 1,000 attendees brought nonperishable food items as admission to the National Festival of Breads, which were donated to the Flint Hills Breadbasket, a community food network in Manhattan to help alleviate hunger and poverty. The King Arthur Bake Truck, part of the Bake for Good program, also handed out treats, collected financial donations and donated all of their breads baked during the festival to the Flint Hills Breadbasket. In total, more than 654 pounds of food was donated to the Flint Hills Breadbasket.

At the evening National Festival of Breads Awards Banquet, the finalists’ breads were auctioned off with proceeds split between the Flint Hills Breadbasket and Stop Hunger Now, a partner organization of sponsor Red Star Yeast. Together, Stop Hunger Now and Red Star Yeast have launched the “Baking the World a Better Place” campaign to raise awareness of chronic hunger issues and provide meals around the world.  About $3,500 was raised to benefit the two organizations.

The finalists for each category and special award winners included:

Additional information about the 2015 National Festival of Breads, including the finalists’ recipes and a complete list of sponsors, is available at NationalFestivalofBreads.com.

The Kansas Wheat Commission is a farmer-funded and governed promotion organization working to secure the future of Kansas wheat globally and domestically through research, promotion, marketing and education. Kansas wheat farmers support the Kansas Wheat Commission with a voluntary 2 cent assessment on each bushel of wheat produced in Kansas. For more information, log onto kansaswheat.org.