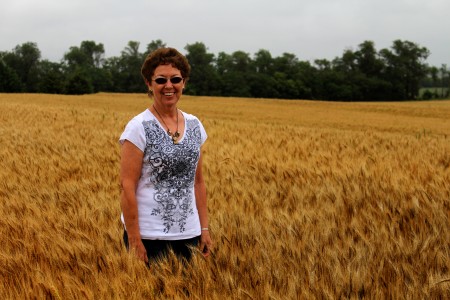 Jane Fry is a second time finalist in the National Festival of Breads. Her Southwest Focaccia earned Jane a top spot in #NFOB17!

Growing up around different family members who baked bread, and an involvement with 4-H in the baking classes, it’s no wonder Jane Fry, Elk Falls, Kansas, has a passion for baking. While Fry says she can’t pinpoint one person who has inspired her baking, she remembers her mom baking bread on special occasions, her grandma always cooking delicious food and her aunt baking wedding cakes, all of which helped steer her in the hobby of baking.

“There were a number of people, but I can’t say one specific person had a tremendous impact on my life, but just growing up in that era, which is different than now, everyone did bake their own products,” Fry says.

Fry says that one of her favorite parts about baking is the positive responses and affirmation she receives from others after they try her baked goods. She says that sitting around a table and eating food is a sharing time for most families, and she loves how it brings everyone together!

Fry says that in her community once a week they have a cover dish dinner for anyone who would like to join. By doing this, Fry says it has made her community of anyone who wants to join a tighter group because of the sharing of food and the bonding it brings to people.

“Food is kind of an open door to caring and sharing with people,” Fry says.

Fry says that she has entered in to the National Festival of Breads for many years, and along with qualifying for the top 8 this year with her recipe, Southwest Focaccia, she was also in the top 8 last year, as well.

When it came to coming up with a recipe for this year’s NFOB, Fry realized it’s what you can do with the basic ingredients to make the recipe unique. She then started to include some of her favorite spices and flavors to give the bread a twist of her own preferences. Fry said once she saw there was a corn category, the inspiration began to flow.

“I don’t look through cookbooks and stuff like that to get inspiration. I sit there and think, ‘What do I like to eat? What are the combination of flavors that I like,’” Fry says.

Since this is her second year qualifying for the top 8, Fry now knows what to expect. She says that since she thoroughly enjoyed everything about the competition last time, she is especially excited for this year.

“I’m just delighted to be there and to be with people who are like-minded, and that have the same enjoyment of bread that I do. It’s just fun to be around people who you can talk bread to, and of course everyone enjoys bread,” Fry says.