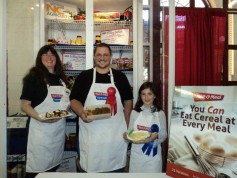 Felice Bogus from Raleigh, North Carolina, combined years of baking flat breads with her daughter and husband and inspiration from spices discovered on a family vacation to Israel to create her winning entry into the Ethnic Breads category of 2015 National Festival of Breads – Chickpea-Stuffed Aleppo Flatbreads.

“This flatbread … emerges as a warm, herby treat that you might find in a stall in a Middle Eastern souk,” she wrote in her entry. “This bread is quick and easy to make but its exotic flavors will transport your family to another world.”

Felice started baking pita crusts when her daughter – now 13 – was in kindergarten. Over the years, the family switched to flat breads, using a baking stone and experimenting with mixing spices into the bread. On a family trip to Israel, Felice discovered za’atar, a Middle Eastern spice mix with a woodsy taste that typically includes oregano, thyme, sesame and sumac. Addition of the Aleppo pepper provided a citrus kick and some heat, while chickpeas added both nutrition and an earthy tone.

“It definitely has a very Middle Eastern flair to it,” she explained. “But, the flavors are not unfamiliar at all.”

Felice is bringing that flair and flavor to the National Festival of Breads. She said she is looking forward to meeting the other contestants and pointed out that she is excited to participate in a contest sponsored by King Arthur Flour.

“I have five or six kinds of their flour in my kitchen right now,” she said. “It is the only flour I will use for bread baking.”

Want the recipe? Come check out Felice and her Chickpea-Stuffed Aleppo Flatbreads at the 2015 National Festival of Breads on June 13, 2015, in Manhattan, Kansas!