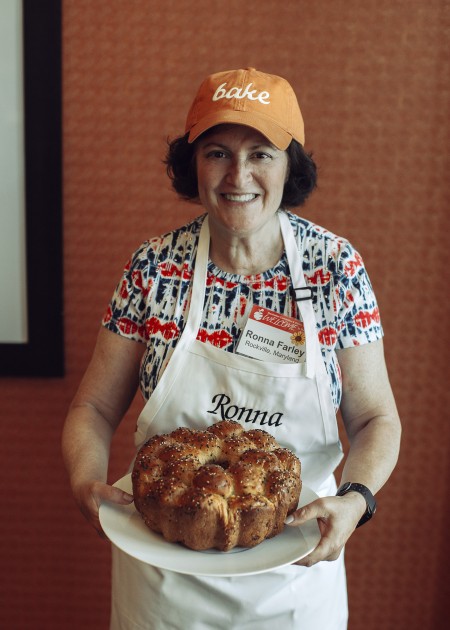 Judges selected Farley’s Seeded Corn and Onion Bubble Loaf from among eight finalist recipes baked at the public competition on June 17 in Manhattan. The National Festival of Breads is the nation’s only amateur bread-baking competition.

This was Farley’s second time in the National Festival of Breads as a top eight finalist. Along with her champion recipe, Seeded Corn and Onion Bubble Loaf, she also received an honorable mention in the rolls category for her recipe, Sharp Cheddar Bay Knots.

As the 2017 National Festival of Breads champion, Farley received $2,000 cash, plus a trip to attend a baking class of her choice at the King Arthur Flour Baking Education Center in Norwich, Vermont. In addition, she will receive a supply (120 envelopes) of Red Star Yeast.

The champion recipe and all eight finalists’ recipes are available at http://nationalfestivalofbreads.com.

In addition to the competition, the National Festival of Breads featured educational baking demonstrations, children’s activities, bread tasting and more. This was the fifth biennial event, and “BBQ Like A Pro” demonstrations and sampling were held in conjunction with the baking contest. The more than 3,000 attendees brought nonperishable food items as admission to the National Festival of Breads, which were donated to the Flint Hills Breadbasket, a community food network in Manhattan to help alleviate hunger and poverty.

The finalists for each category and special award winners included:

Additional information about the 2017 National Festival of Breads, including the finalists’ recipes and a complete list of sponsors, is available at NationalFestivalofBreads.com.