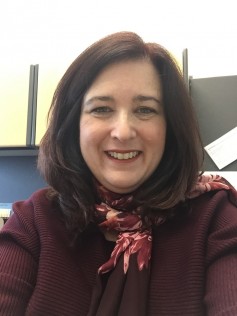 Kellie White is a first time finalist in the National Festival of Breads. Her Orange-Spice Anadama Wreath earned Kellie a top spot in #NFOB17!

Getting into baking for Kellie White, of Valley Park, Missouri, was something bound to happen. Growing up in a small town in Kansas, White said they didn’t have bakeries in town so the baked goods were always homemade by her and her family.

“My mom baked all of the time, and she’s a great baker. Her family also has a lot of talent in the kitchen so I grew up seeing my grandparents bake and my neighbors and friends, too,” White says.

White says that she owes a lot of her love of baking to Ethel, a lady who was a friend of her parents. She remembers a day when she was invited to spend the day with Ethel in the kitchen. During that time, Ethel taught White how to make yeast bread, a bread she had never made before.

“This was the first time I had ever seen anyone bake a yeast bread and she was so good at it and so practiced; it was like second nature to her. I always remember that as kind of being a foundation of my interest and knowledge in baking,” White says.

White says that her love for baking comes from the appreciative response she receives from people. She says that it’s very heartwarming to receive or give any type of baked good, and the reaction is normally very satisfying. She also loves the time you spend on a baked good to make it just right!

"I like the care you have to give a baked product. You really have to think about it and pay attention to it,” White says.

White’s recipe that made it to the top eight, Orange-Spice Anadama Wreath with Walnuts and Dates, had inspiration come from a few different places. Between Ethel and her mother’s baking styles, she took a little bit from each!

“My recipe was based on an anadama bread, and that’s a bread I remember my mom baking a lot growing up,” White says.

White says that the anadama bread recipe that she and her mom would bake, came from Ethel, the lady she learned to baked yeast bread from.

“This same lady, Ethel, used to bring us a braided loaf of bread at Christmas. So, I thought, wouldn’t that be cool if I came up with a new recipe that was an anadama based but also had a wreath or braided shape, and something that would be for the holidays because when I think of baking, I think of the holidays,” White says.

Along with White being excited about her new recipe being chosen as one of the finalists, she’s also excited about attending the competition in general because she was raised so close to Manhattan in Westmoreland, Kansas!

“I’m most excited about where the competition is located because it’s near where I grew up. I am excited to be able to compete so near my hometown and to have some of my family and friends be there to watch,” White says.