Meet Ronna Farley on the first of eight #FinalistFridays! 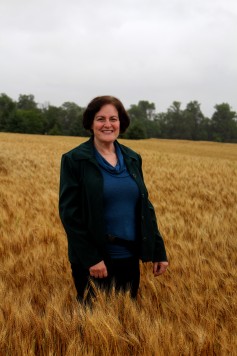 Ronna Farley is a second time finalist in the National Festival of Breads. This year her entry for a Seeded Corn and Onion Bubble Loaf earned Ronna a top spot in #NFOB17!

Between her family of two kids, three grandchildren and dogs who love leftovers, Ronna Farley, of Rockville, Maryland, gets to put her baking skills to good use often.  Farley, who has been baking since she was a little girl with her mother, says that she enjoys baking for the challenging aspect of it.

“I like things that aren’t too difficult, but I still like a challenge. I’m not real big on experimenting with bold flavors. I like to stick with what I know and what I like and create from there,” Farley says.

Farley says she first started baking as a kid in her home economic classes in school. She’d also enjoy helping her mom bake whenever she had the chance to. She says that now when she bakes, she does it for the creativity side of it.

“I could be an artist if I made time for it. I think art, baking, painting, sculpting and all those things can go together,” Farley says.

Farley works as a cashier at a grocery store in Maryland, and she says that a lot of the inspiration she gets for recipes is by seeing what other people are buying and how she can incorporate it into her own recipes she makes.

“I especially love seeing what people from other countries are buying, and the different ideas of ingredients that I should try in recipes. Sometimes I’ll even ask them, ‘What are you doing with that?’ or, ‘What is that?’ because there are different things that we sell that I don’t even know what they are,” Farley says.

Because of Farley’s love for baking, she has entered many cooking contests. She says that she looks to find something that’s different from other recipes that people will be submitting. Normally it involves her getting an idea in her head, but changing it to stand out.

“I think it’s important when you’re creating something to make it unique. You can get an idea from somewhere, but something about it has to be really different to make it stand out,” Farley says.

When it comes to Farley’s recipe, Seeded Corn and Onion Bubble Loaf, which qualified as one of the top eight finalists in the National Festival of Breads, her inspiration comes from a recipe much different than most would expect.

“I got the inspiration from a corn pudding recipe my family always enjoys,” Farley says, “I thought maybe since they have a corn category, I could do something like my corn pudding and put it in a bread, and it worked out really well.”

This is Farley’s second time in the National Festival of Breads as a top eight finalist. Along with her recipe, Seeded Corn and Onion Bubble Loaf, she also has received an honorable mention in the rolls category for her recipe, Sharp Cheddar Bay Knots. When it comes to being in Manhattan for the National Festival of Breads, she says that she is excited for the whole experience.

“I really enjoyed last time. The people who are in charge are wonderful and considerate. All the details and all of the goodies they gave us — it was all wonderful and it was something I wanted to do again,” Farley says.