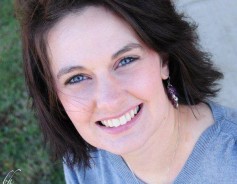 Tiffany Aaron is a first time finalist in the National Festival of Breads. Her Tumeric-Rosemary &amp; Sweet Potato Rosettes earned Tiffany a top spot in #NFOB17!

For Tiffany Aaron, of Quitman, Arkansas, her life at home is anything but monotonous. Along with being a mom to five children, Aaron also writes for Country Rebel Clothing Company, as well as bakes whenever she gets the chance to. Calling herself an obsessed baker, Aaron says she will try any recipe once just to say she’s tried it.

“I realized my talent was in the kitchen and from there I fell in love with it. I’ve put in a lot of time learning new techniques and trying to hone my skills,” Aaron says.

Aaron says that baking for her is a passion and something she loves to do. With any recipe she decides to make, she says she’ll work it over and over again until she gets it right.

Growing up in a small town in Montana, Aaron says that her mom was an avid cook and baker. They didn’t go out to eat or to the store often as some did. She recalls times of them milling up their own wheat and using it to bake breads.

“My mom always had us in the kitchen. She’d let us throw things into a pot and just experiment. We baked and cooked almost everything we ate,” Aaron says.

Aaron says that baking is a very comforting pastime. She enjoys baking down home, comfortable food she can share with everyone.

“I love baking because of the sharing aspect of it. You can share with your family and friends. There’s also a stress relief that comes with it; it’s a great way to unwind. I’m surprised by how many people don’t bake anymore,” Aaron says.

The inspiration for Aaron’s top eight finalist recipe, Tumeric-Rosemary & Sweet Potato Rosettes, came from her father-in-law, who she says supplied all the sweet potatoes for the recipe. Aaron says that when coming up with the recipe, she decided to use her most requested ingredient, oatmeal, as the base. From there, she added the sweet potatoes, turmeric and rosemary. She says that the most important piece of information she has gotten was from a friend who told her, “Put you on a plate.” She said that once she started making the recipe, she thought about if she and her family would like it or not and continued to go from there. As for working with the recipe to make it so tasty, Aaron says she knew what she wanted the recipe to taste like, and went from there.

“When working with the recipe to get it how I wanted it, I would adjust things like the sweet potato amount. I was never overthinking it and always had a goal in mind,” Aaron says.

While she is very excited about getting to attend the contest, she is especially excited to bring one of her children along with her. Since Aaron has five children, each time she goes to a contest she tries to bring one child with her.

“I’m excited about getting to go on the farm tour, but also getting to bring my middle daughter with me. It will be a very special time for both of us,” Aaron says.