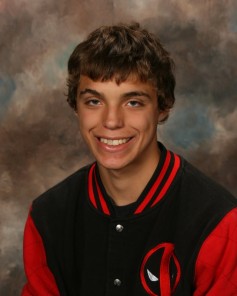 Being in high school, the oldest brother of eight siblings, all while trying to find time outside of school and school work to focus on hobbies can sometimes be difficult.

Thankfully, the perks of being in school means ample opportunities for students to hone their skills while taking classes in subjects they enjoy. For Michael Favor, who just finished his junior year at Madison High School, his baking hobby stems from his Family and Consumer Science class taught by Melissa Harlan. Although Favor’s baking skills were limited to boxes and mixed ingredients when he first started taking her class, she says he has gained a range of baking skills and loves to watch him express himself. Harlan says her favorite part about teaching family and consumer science is the fulfilment of allowing her students the freedom to engage in hands-on learning in a collaborative manner.

During Harlan’s Food Science class last fall, she took her students to the Kansas Wheat Innovation Center, where they toured the test kitchen and got to know the ins and outs of what happens there. While there, they also had the opportunity to learn about the National Festival of Breads and what all the contest entails. It was after this visit that Harlan and her students decided to come up with original recipes to submit for the Festival. The students then went back to their class and constructed an original recipe, tested it in their test kitchen, made any edits they needed to the recipe to perfect it and then entered it into the competition.

Harlan says, “Upon returning from our trip, we reflected upon our experiences as a class and they unanimously chose to spend a two week period of going through the steps of formulating ideas, conducting research and testing our various products in the food lab.”

Preparing for National Festival of Breads has been rewarding for Harlan as she says her favorite part was watching Favor have a light in his eyes when he found out he was the winner of his division. But additionally, she shares the enjoyment she has had observing him as he walked through the process of changing his ideas from abstract to concrete.

Luckily for Favor, the judges loved his recipe, French Vanilla Donuts. Even though Favor’s baking background isn’t as extensive as some, his skills grew into perfecting his French Vanilla Donuts recipe all due to Harlan’s class. His recipe submitted for the National Festival of Breads was created due to some of his favorite foods and flavors. He says he loves donuts and vanilla, so the two went hand-in-hand.

Not only did Favor place first overall in the youth division, but he also received a special award from the Kansas Soybean Commission.

Harlan along with Ryan Bradbury, the Madison High School principal and superintendent, decided to recognize and surprise the students in front of their high school peers after they found out they had won in the youth division. The assembly announcement was a total surprise; only Harlan and Bradbury knew that Favor had won his division and that the other students had received awards as well. Favor’s peers were supportive and cheered him on as he was recognized on stage for his accomplishment.

“We wanted to bring in the wow factor and elevate the honor level for Michael,” Harlan said. “It was a very special moment.”

Favor was awarded $600 for winning the youth division and the special award. He plans to save a majority of the money, but spend some on his other hobby, fishing.