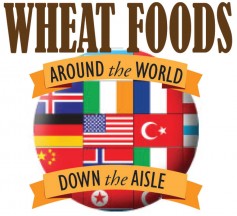 No matter where you live in the world, wheat will probably be close by since it is the most consumed grain in the world. This isn’t surprising since it can be grown in many climates and used in a variety of highly palatable and nutritious ways. Here are some examples of how different regions around the world use wheat in their cuisines:

There are six different classes of wheat: Hard Red Winter, Hard Red Spring, Soft Red Winter, Hard White, Soft White and Durum. Each of these classes varies in its protein and gluten content. Hard wheats are higher in protein and used in breads and quickbreads. Soft, lower protein wheats are used in cakes, pastries, cookies, crackers, flatbreads and Asian-style noodles. Hard white wheat is also used for Asian-style noodles as well as breads. Durum wheat is used in pasta and egg noodles.

Most wheat is typically milled into flour and is then used to make a wide range of foods including breads,muffins, noodles, pasta, biscuits, cakes, cookies, pastries, cereal bars, sweet and savory snack foods, and crackers. Depending on the region of the world, wheat may be eaten as bread that is flat or loaved, leavened or unleavened, or processed into pasta or couscous.

A World of Wheat Products

Wheat can also be used in other forms to make products like those described below:

On your next grocery shopping trip, spice up your meals by checking out the international sections for new ingredients and flavors to pair with your favorite wheat foods. Some quick and easy ideas:

Enjoy the many types of wheat foods and let it take you on a delicious around the world “stay-cation” in your own kitchen. It truly is the staff of life for many people and cultures.

For a selection of international recipes from the Wheat Foods Council, visit www.wheatfoods.com/resources.