Bushels, bushels, bushels. During wheat harvest, wheat yields are calculated as bushels per acre, wheat prices are cited as dollars per bushel and overall bushels produced determines whether or not Kansas keeps its top wheat production spot. But, what exactly is a bushel? And what does a bushel mean for a consumer?

In reality, Kansas wheat is used not only for producing flour and making wheat foods. Approximately half of wheat produced in Kansas is exported to other countries and other bushels are used for anything from livestock and aquaculture feed to plastics. This statistical extrapolation, however, attempts to translate the importance of Kansas wheat to our dinner plates based on total volume.

A Bushel, A Basket

At its simplest, a bushel is a unit of measurement. According to the Encyclopedia Britannica, the U.S. bushel was derived from the Winchester bushel, a British measurement dating back to the 15th century. At one time, farm products could be measured by how much would fit in a bushel basket. Today, a bushel has a weight equivalent, different for every commodity. For wheat, one bushel equals 60 pounds of wheat or approximately one million wheat kernels. A common semi-truck grain hopper can hold approximately 1,000 bushels of wheat – or 60,000 pounds of wheat in a single load.

And Kansas farmers harvest a lot of bushels. According to the USDA National Agricultural Statistics Service (NASS), Kansas farmers typically harvest 37.5 bushels per acre, based on the ten-year average. This year, NASS predicted in its July report that, on average, Kansas farmers will harvest 36 percent more wheat than last year’s drought-stricken crop – a total of 334 million bushels of wheat. 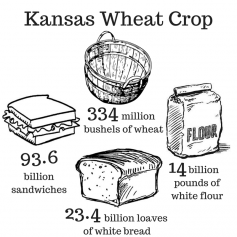 Each bushel of hard red winter (HRW) wheat has the potential to become a great tasting loaf of bread, box of cereal, tortilla or any number of tasty wheat foods products. But first those bushels of wheat kernels must be milled into flour.

On the Plate, In the Bowl

But, consumers buy more than just flour. And since Kansas is known as America’s Breadbasket, let’s start with bread.

If that sounds like a lot of gluten – it is! The average American eats 193 sandwiches in a year. By that math, the entire population of the United States (more than 318.9 million people) could eat their fill of sandwiches and still have 32.1 billion sandwiches (white bread) left!

If you prefer Wheaties to toast in the morning, one bushel of wheat can make approximately 45 boxes of wheat flaked cereal. The entire Kansas wheat crop could then make 15 billion boxes of cereal. That means each of the 2,780 athletes at the 2014 Winter Olympics could be featured on more than 5 million boxes of Wheaties. Better yet, the approximate 60,000 Kansas farmers could have more than 250,000 of their own boxes of Wheaties!

No matter your wheat foods preferences, Kansas farmers have earned their title of America’s Breadbasket, producing enough bushels to help secure an affordable supply here at home with enough to share.

Like math? While the United States uses bushels to measure wheat, many other countries use metric tons. One metric ton equals 36.743 bushels. Have fun calculating!