Pinterest is a breeding ground for far-fetch craft and baking projects that look temptingly easy to accomplish. But as many over-confident DIY-ers know, sometimes these fool-proof recipes and crafts end up making a fool out of us.

Halloween is right around the corner, and with it comes spooky themed parties in classrooms, workplaces and even at home! In order to help you impress even the smuggest of food critics, I tested popular (and adorable) Halloween treats so you don’t have to submit your own trials to Pinterest Fails.

For reference, I’m not a baker. I don’t bake much as a hobby and I haven’t had much for baking training. My craft skills are not on point and I can’t count art of any sort as one of my talents. I’d like to think that my absolute mediocrity makes me the perfect stand in for the average Pinterest browser. 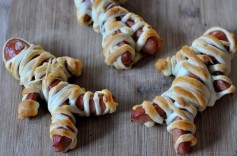 I love these adorable little guys! I think they are fun, festive and pretty recognizable. There are several different versions on the internet, but I chose the ones with the arms and the legs and dropped the cheese from the recipe. Don’t get me wrong, I love cheese dogs, but I’ll be honest and admit that I forgot to grab cheese at the store.

There is nothing quite like the expression that I got as a coworker brought in a tour group to the kitchen as I was snipping the mummies’ arms and legs with a pair of comically large kitchen shears.

While the treat starts off looking a little questionable at the beginning, the more of the dough bandages you wrap around the hot dog, the better. The example shows the arms and legs eventually being spread pretty far apart from the body. I think this gives it an awesome look, but to be honest I have no idea how the recipe developer got that to work. Whenever I tried to pry the limbs wider open, they wanted to tear off.

It might help to have a wider hot dog in order to have fairly deep cuts. The key to achieving a good looking bandage is to make sure each strand is cut extremely thin. Make sure that you leave room for the super spooky eyes!

I really enjoyed the Mummy Dogs. I think they were pretty easy to create, look great and are really delicious to munch on! 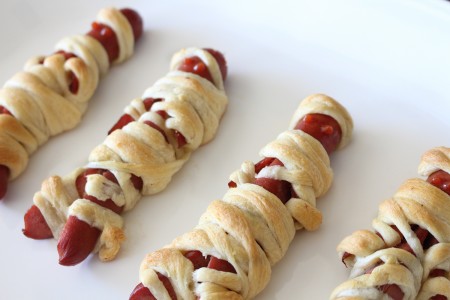 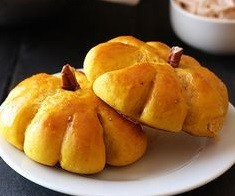 For these Pumpkin Rolls I actually used a pumpkin dough (complete with pumpkin puree!) I think the pumpkin adds a nice moisture to the rolls. The recipe calls for eight cuts around the pumpkin, but the rebel in me switched it up depending on the size of the roll. At first I found myself guesstimating  cut distances by cutting around the dough willy-nilly, and my estimates were never quite spot on. The easiest way to get a uniform pumpkin is to snip the four cardinal directions and cut those sections in half.

I think the pumpkins that looked the most realistic were ones that had a less deep of cut. While the pumpkins turned out pretty orange, I wish I would have thought to add in a bit of orange food coloring to create a bit of depth to the color. While I was letting the rolls cool I had several people come in and ask what the pumpkins were for. They seem realistic, and are, of course, delicious.

The pumpkins were my favorite to make. They were easy to shape, and even the bad ones looked great! 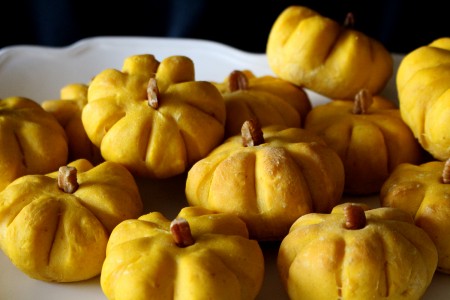 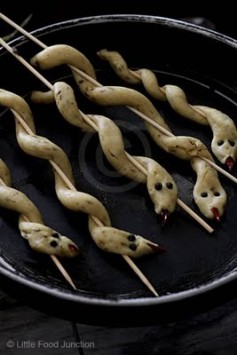 I used the same dough from the pumpkins to create these sneaky serpents. Calling them sneaky is fair, because these little guys are harder to make than they seem. My overconfidence really creeped up on this shape, I saved them for the last thinking, “You roll the dough into a worm and wrap it around a stick. Easy peasy!”

It could have been baker impatience, dough feistiness or a number of other things, but I could not get these snakes right. Some were too fat so they looked like they just consumed a whole antelope and many of them had imperfect heads.

Snakes on a Stick were hands down my least favorite of the bunch. Maybe someone who has excellent Play-Doh skills can give these snakes the shape they deserve. 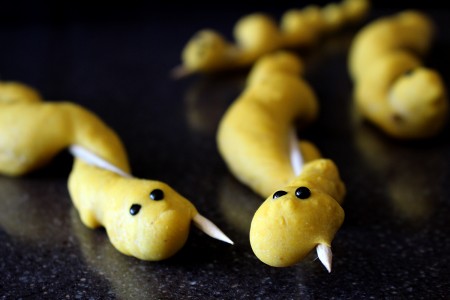 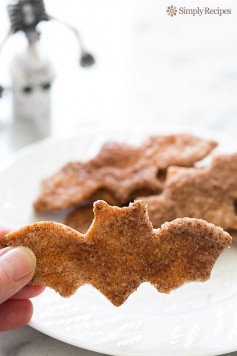 You know that weird friend who thinks bats are sort of cute? As long as the bats aren’t flying into my face, I think they’re adorable. With this recipe, there is no doubt that these bats are as adorable as they are tasty. I actually substituted a whole wheat flour tortilla in for the regular flour tortilla, and that extra whole grain goodness made me feel a little better about eating something coated in butter.

The recipe notes to keep the butter and toppings on one side. I experimented with the suggestion and found that it gets a little TOO crispy with both sides covered with ingredients.

These Spooky Cinnamon Sugar Flour Tortilla Crisps were delightful. Each one came out looking perfect, and you couldn’t stop at devouring just one! 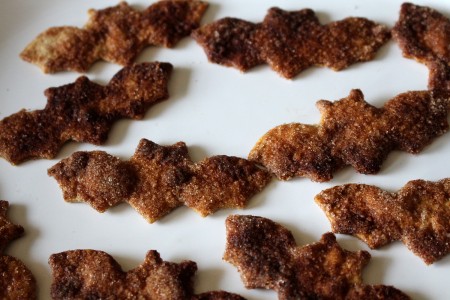 This cake is the attention getter of the treats. When I first saw it on Pinterest I thought it had to be too good to be true, so I went into baking it

very skeptically. If I had to do the recipe over again I would add a smidge more food coloring to the center, I think a little more definition to the pumpkin would help it pop in visibility a bit more.

I would also not recommend using the frosting that the recipe calls for. When I made it, it just tasted like powdered sugar in frosting form. I actually used the frosting from this recipe which made for a great accent to the cake. For maximum “wow factor”, I would recommend slicing the first slice off before you show it off because the ends might not have as much of the pumpkin-filled center.

Everyone who ate this cake really enjoyed it. The tastiness of it is a great perk, but everyone was fascinated with how I did it, so you may have to have a speech rehearsed with quick directions to give to just about everyone who attends your party. 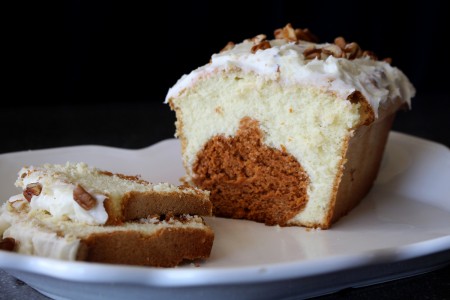 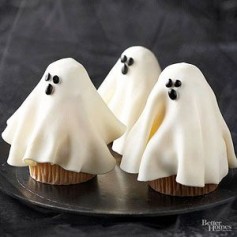 These cupcakes were another cause of skepticism when I caught a glimpse of them on Pinterest. These fellas looked adorable when a professional did them, but what would they look like when someone with the art skills of a three year old tried pulling them off?

This was the first time I have ever worked with fondant. My sources say that if you buy fondant from the store, be sure to grab something with a bit of flavor, so I grabbed vanilla. Warning, if you’ve never worked with fondant before, apparently it is supposed to be as hard as a rock when it comes out of the box. It also picks up crumbs of everything incredibly easily, so if you’ve made something recently, say a crumbly pumpkin cake, make sure you get ALL of the crumbs off of the counter.

Apparently I was not reading directions well when I started this project because having two separate sizes of cupcakes is sort of important. I used two cupcakes of the same size, so I feel like my ghosts would have self-esteem issues.

“Does this sheet make my butt look big?”

The cupcakes themselves turn out deliciously, so it’s almost too bad that they are covered up. Coworkers suggested using two mini-cupcakes instead, because having something with two cupcakes, a donut hole, frosting and fondant is a little intimidating.

I love the way these look, but I think that when people see them at a party they will think, “Those are adorable, and I don’t want to ruin one by eating it!”

I am planning on making these for a Halloween party I am throwing, but they will be more for decoration than eating. While Halloween is a holiday essentially celebrating consuming three days’ worth of calories into one night, I don’t think all of those calories should be found in a single ghost statue. I would also recommend drawing funny eyebrows onto you ghosts to add some funky personality. 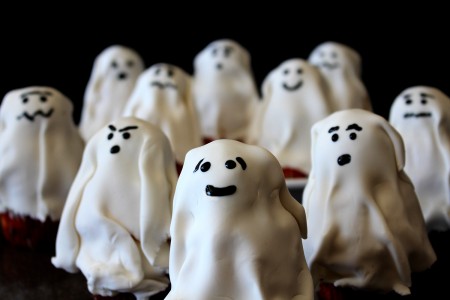 This was a fun project to work on, and the kitchen was the hottest spot for visitors to the Kansas Wheat Innovation Center for the two days it took me to crank these treats out. I’m confident that these delicious baked goods will help any frantic host plan a spook-tacular party! Have a  safe and ghoulishly fun Halloween! 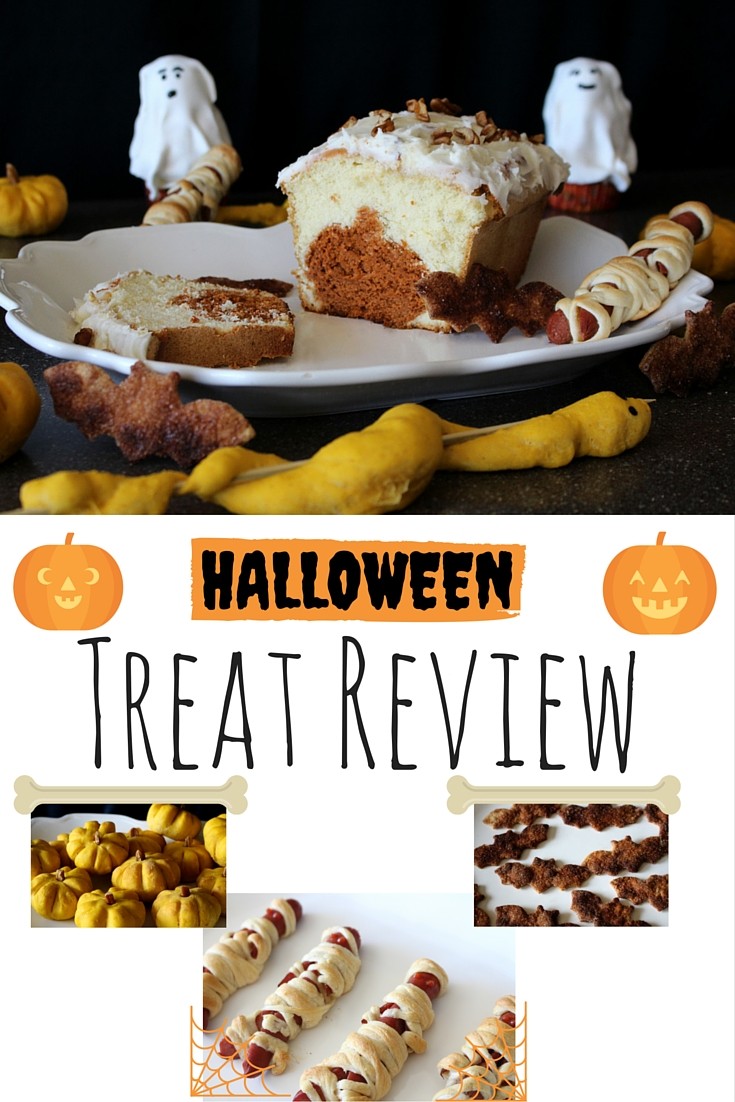