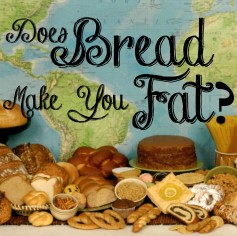 Do carbohydrates and wheat make you fat?

If you believe old wives’ tales, then the answer is likely “yes.” However, if you believe in science, follow along and learn about all the research that proves otherwise.

What do the following studies have in common?

Some people claim that eating wheat increases your appetite, but there is no scientific research to support that. One study shows that eating wheat has no effect on satiety (feeling full) or increased appetite while several others show it actually enhances satiety and reduces caloric intake. These studies are consistent with the large body of epidemiological evidence showing whole grain consumption (most of it in the U.S. is from wheat) is actually associated with healthier body weights.

You might have heard that wheat and carbohydrates increase harmful belly fat. Not so.

Furthermore, if you don’t eat wheat, you could increase your risk of not getting enough fiber, a nutrient of concern. Also, because of folic acid fortification of enriched grains in 1998, neural tube birth defects, such as spina bifida, have been decreased by 36 percent in the U.S.  The CDC acknowledges that enriched grains, rather than supplements, are responsible for this achievement and in May 2011 named folic acid fortification as one of the top ten public health achievements of the last decade. This incredible health initiative has saved Americans $4.7 billion in direct costs. All women of child-bearing age (including teenagers) should be consuming three servings of enriched grains daily and taking a folic acid supplement.

Approximately seven percent of Americans cannot eat wheat because it contains gluten. That small percentage includes approximately one percent who have celiac disease, an autoimmune disease, and six percent who have non-celiac disease gluten sensitivity. Celiac disease, while serious for those who have it, is actually lower in incidence than autism or diabetes. Going on a gluten-free diet when you don’t need to risks trivializing the serious disease that celiac is. If you think you have celiac disease, get tested before going on a gluten-free diet or the test results will not be accurate. [Read more (PDF)]

You may have also heard that the wheat we consume today is different than the wheat our grandparents ate. There are no studies that show this is true for U.S. wheats.

Eating wheat is nutritious and economical.  Wheat forms the basis of some of our favorite foods so follow the science and enjoy!