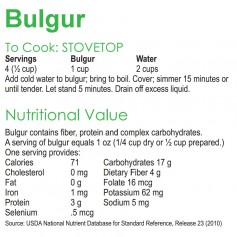 Bulgur may not be a Kansas family staple, but with a higher fiber content than oatmeal as well as plenty of iron, magnesium and B vitamins, maybe it should be.

Bulgur is wheat kernels that have been soaked, boiled and dried. A small portion of the bran is removed (5 percent) and the kernel is cracked into pieces.

The Chinese ate this food as early as 2,800 BC. The Romans called it “cerealis” after the goddess of the harvest – Ceres. Today, it is a mainstay in the Middle Eastern diet, where it is called arisah.

Thousands of years of taste testing means bulgur can be incorporated in any recipe genre. Add bulgur to meatloaf, soups, stews, casseroles – even meat sauces for Mexican or Italian dishes. Also try bulgur in waffles, pancakes, muffins or other baked goods to add a nutty flavor. Or serve it as a main or side dish mixed with vegetables, nuts or small pieces of meat.

Try these tasty recipes that use bulgur.

Adapted from the Wheat Foods Council’s Grains of Truth – Bulgur.